After much burning of midnight oil, my recreation/upgrading of the classic Delawarr 9 radionics box is complete.

The device is based on the original Delawarr unit, a example of which can be found on the Bakken Museum website. Kudos to the Bakken for publishing the photos of the exterior and interior of the device. And my thanks to Peter at Intuitive Earth for information on operation of the unit, and to Tigrincs in Hungary who provided me with an operation manual for Delawarr equipment.

Delawarr devices seem to be basic resistance-based systems, with an interesting feature – rotating magnets. The photo from the Bakken collection shows a short rotating shaft extending a few inches down from the top panel, mounted directly behind the first tuning dial in the series. It puzzeld me at first as to what the shaft was for – I wondered if there was a missing part. But I learned that the shaft is magnetized, and it is an integral part of the design. It happens that I had a solid rod magnet I had purchased some time ago just out of curiosity, and with the feeling I would use it in some device someday. The rod is interesting as it is magnetized at right angles instead of lengthwise – in other words, the instead of the N and S poles being at the ends, one side of the rod is N and the other is S. 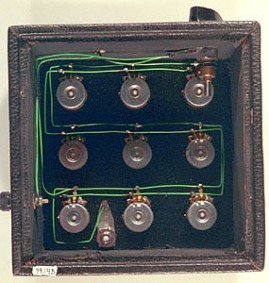 So I cut off a short piece of the longer magnet rod, and mounted it on the rotating shaft (I cannibalized a dual-ganged potentiometer to make the rotator). In that configuration it generates a magnetic field polarized in lines parallel to the earth, which can be rotated to any angle in relation to the planetary magnetic field. It’s quite powerful and will upset a compass held within a hand’s length to the box. You can see the rotating shaft in the upper right corner of the two photos here. On the top, the turning knob is mounted to a dial plate with a compass face. I adjusted the the knob so that when it points to the N, the magnet is oriented to the dial. Peter pointed out to me that the placement of the magnet behind the first dial is necessary for proper operation. The rotating magnet becomes a tuning device, as the instrument is powered with magnetism (I’m curious if rapidly spinning the dial will “neutralize” the machine after use. This will require some experimentation.) The manual describes setting the dials to specific rate numbers for a given target (the manual comes with an atlas of rates) and turning the magnet dial to tune while rubbing the stick pad.

I followed the wiring pattern exactly, although I added one new circuit path and feature – a ground plane. In the original, only the center tap and one side of the potentiometers were connected (making them functionally rheostats.) So I connected the other taps together as the “ground buss” (as common with most resistance-type devices today.)

On the bottom panel of my Delawarr 9 is a solid non-magnetic tin plate, and the grounds are all connected to that. I also added ground posts to the connectors (the original had only single-side instead of plus and minus connections), moved the connector that originally was in the front panel to the other side of the box (it just seemed more convenient and looked cleaner.) This allows me to interface the D-9 with my existing external stick pads, probes and tuners. I also put a single grounding connector on the back panel, which can connect the ground plane to the earth if desired.

The top panel of the original had the magnetic control dial and a single, solid metal plate, which was the witness “well”. I decided to try something to make it easier to work with photos, sigils, talismans and such – a solid brass container that is meant to hold business cards, but provides a place to hold flat objects securely inside. So a trend witness can be left in the container without fear of it being knocked or blown off the top of the box. Or a vial can be placed right on top of the closed lid, which is still electrically connected.

The box is plain wood with a Bakelite front panel. The pots are all 10k ohm (as in the original) except for the first dial, which is 100k, and it’s dial plate is calibrated from 0-100 instead of 0-10. Peter explained to me that the original device was considered to be a kind of “axillary” to the full Delawarr diagnotic and treatment device. The practitioner would use the larger system to analyze the subject, and then use the smaller device (with no stick pad or fine tuning dial of it’s own) for treatment and manifestation, using the dial settings developed on the bigger analyzer.

So, I tried connecting my external stick pad unit to it, along with the AX-1000 tuner, and with those additions it makes it into the full Delawarr analyzer system. The larger instruments (which were either 9 or 12 dial circuits) had a final tuning dial calibrated 0-100. This was also used to fine tune the Rates by using the stick pad.

I ran the usual system check using my own witness sample and seeing if I could pick up a stick reaction. And I did quickly and easily! In my first trials I found that I got a reaction with no witness when I turned the magnet control dial until the knob pointed to magnetic north. This happened accurately even when I had my eyes closed, so this is a very powerful and sensitive device. (George and Marjorie Delawarr deserve their reputations!)

It seems to me that aside from operating it according to the historical manner described in the operator’s manual (which includes four tutorial lessons), it might make one very powerful manifestation machine. I’m not aware of any other new radionic devices being made today that use magnets the way Delawarr did, except for perhaps the Gateway Research AR series of instruments.

Here’s a description of the circuit from the Intuitive Earth website:

It is essentially a magnetic circuit, beginning with the witness plate mounted on top, or an optional input socket. The subject’s vibrations are drawn into the North pole of a rod magnet which can be rotated, via a knob, 360 degrees upon its axis to mesh with the prevailing energy fields. The circuit then continues out of the CENTER of the magnet (Bloch wall), through nine potentiometers wired in parallel, and back to the plate, or the output socket. The latter also accepts an plug-in stick pad.

Here are some more photos of the finished device, along with the front panel of the original for comparison. 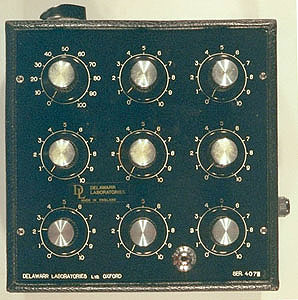 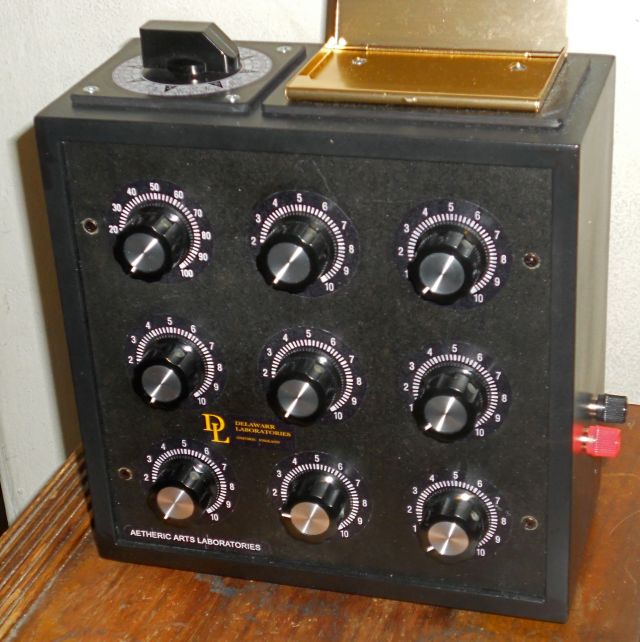