We are back! Aetheric Arts has gone into production of the Hills Pi-Ray Coffer 2.0, based on the original design by Christopher Hills, as sold by Super Sensonics of California in the late 1970s. It was called the “Pi-Ray Orgone Accumulator Coffer” (the “Pi” referring to “pyramid”, not the Greek letter – I don’t know why he didn’t spell it “Py-Ray”) but “Pi-Ray Coffer” has become the common nickname. Originals are rare and fetch high prices today. The price was $79 in 1978, but adjusting for 286.7% inflation since 1978, $79 is equal to $305.51 in 2018. So at our price of $195 for the basic unit, it’s a bargain!

A Pi-Ray Coffer is a Radionic broadcaster but there are no selector switches, specimen wells, rheostats, rubbing plates or electrical power. Instead, the Pi-Ray Coffer is tuned or pre-set to Aetheric energy fields and requires no tuning or adjustment by the operator. It can be used as a stand-alone “wishing machine” (probably it’s most common application) or in conjunction with a separate radionic device.

The original Pi-Ray Coffer measured 3 inches on a side, but we opted to enlarge the 2.0 to 4 inches, for reasons of construction. But Hills and SuperSensonics also produced some Coffers of larger sizes, including one that measured 6 inches on a side.

The Pi-Ray Coffer is an excellent “passive” broadcasting device. For example, you could charge a “target” placed on the stick pad or target platform (or connected to the output terminals) of the other device, like a crystal or other medium, then place the witness and target inside the coil, for distance balancing. A specific intent, written on a slip of paper, may also be added, such as “energy”, “love”, “health” and so on.

The original Pi-Ray Coffer was made with a “secret formula” of “minerals” in the base that Hills claimed was the basis for the floor of the Great Pyramid. He never revealed what his formula was, but subsequent research has shown that it was an early form of “orgonite” – mineral crystals and organics suspended in a solid medium. Since I’m not a big fan of orgonite – I think it’s no substitute for a proper orgone device made according to Wilhelm Reich’s designs – I opted to create an orgone platform as the base. 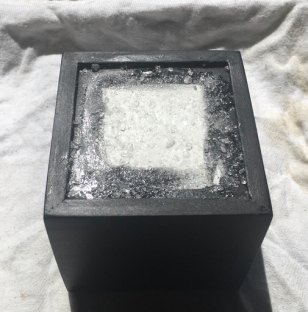 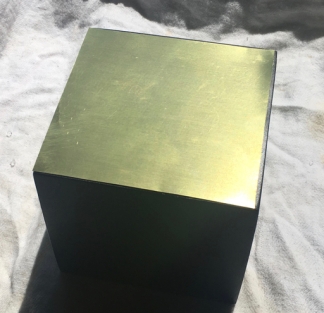 These pictures show the hollow base of the Coffer being loaded with the crushed quartz crystals, suspended in shellac, as a component of the Reichian orgone platform that is the base of the device. The gap is then filled in with cotton fiber, then a sheet of brass is placed over it. The brass is then covered by a sheet of bakelite, and finally the green felt bottom (see below). So we end up with the following layers (from the bottom up): green felt; bakelite; brass sheet; cotton fiber; crushed quartz crystal in shellac binding; wood; copper sheet; wood; green felt. Together this makes a Reich orgone platform.

This shows the Coffer right before the final assembly. Mounting a tube and wiring a coil inside a box is not easy (kind of like building a ship in a bottle) so the tube assembly is built and then mounted with epoxy into the box.

The “Basic Black” model is painted inside and out with “vantablack 2.0”, an amazingly deep black paint designed to absorb all light. You can see from the top picture that it doesn’t quite absorb ALL light, but it’s the blackest black you can get, outside of true industrial Vantablack. (The background to the picture is solid black velveteen, and the box is blacker than that!)

Here’s pictures of the exterior of the finished Coffer. The small disk inside the lid is a neodymium magnet that is much more powerful than the ceramic magnets of the original version. Note the binding post for grounding the device (which Hills considered important, as do I.) 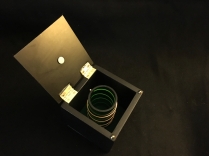 Below is a page from the book, Rays From The Capstone by Hills, which shows the original version of the coffer. I opted to forego the small hole in the lid, and the small plastic box attached to the top. I believe the box was for holding crystals to be charged, but a crystal or other target can be simply placed in the center of the 2-D pyramid. The hole I think was there as a mounting point for an “antenna” consisting of a stack of half-spheres of wood. They were  stacked in top of each other with a metal rod running through their centers, which then I assume dropped into the hole. Though Hills produced a few of these “antennas” experimentally, I haven’t found such a product offered in any catalogs of the time.

Each Coffer is hand crafted of the finest materials.

The Coffer can also be ordered with an exotic wood exterior, like cherrywood, mahogany or sapele (the wood used for the backs of acoustic guitars, it’s very pretty!) for additional cost, depending on the rarity of the wood.

Contact us a aethericarts@comcast.net for more information, or to place your order!

Aetheric Artist
View all posts by josephmax →
This entry was posted in Art, Psionics, Radionics. Bookmark the permalink.